It is with great pleasure that we share that the German television show “Wunderschön!” had 400.000 viewers on the episode last Sunday (16th June 2019). This information was confirmed by the regional public broadcaster for Western Germany, WDR.

Ateles Films was guest on this show hosted by Andrea Grießmann, to show a bit of our filming work in Oostvaardersplassen during our recent film “A Wild Fox Life. We featured in the final minutes of the show, closing it with the great Andrea!

The program had a total duration of one hour and a half and explores intensively the best sites to visit in the Flevoland region (also Blokzijl, Kampen and Hilversum), in The Netherlands.

We are very proud and happy to be part of such a nice program! Thanks to the Producer Sabine!

CLICK HERE if you did not have opportunity to watch it yet!!! 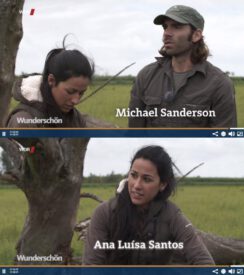 A great sequence together with @4nik4s on #WDR #Wunderschön German Travel Documentary about Flevoland and our work filming foxes check out the link for full episode (ours is the last 8mins) https://t.co/3tj8FU3MD6 Thanks to all #atelesfilms #awildfoxlife #wildlifefilm pic.twitter.com/tlZW8ARzYo